Billions of dollars can be evaporated from the cryptocurrency market in a short time because of the large fluctuations in the balance algorithm.

The phrase "de-peg" is appearing more and more in the crypto world and is one of the big factors that caused the market to plummet. This not only affects retail investors, even large institutions holding billions of dollars also suffer losses and face the risk of bankruptcy.

In the crypto industry, "de-peg" is the term for a token that no longer holds a previously fixed rate on a currency. As of mid-2022, there are about 5 de-pegs taking place and have a significant impact on the overall market.

This situation became noticeable in April, when the balancing algorithm between Terra (Luna) and UST fluctuated wildly causing both cryptocurrencies to lose most of their value, despite efforts to contain it. 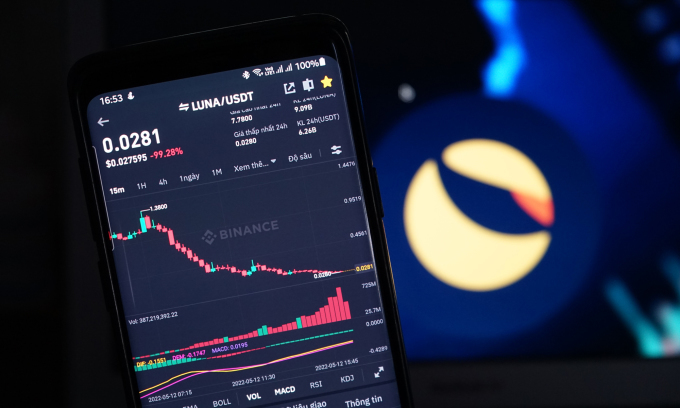 The LUNA cryptocurrency declined in value after a short time. Photo: Reuters.

Luna is the project governance token of the Terra blockchain, which plays an important role in the UST and its stablecoins. In principle, UST is the raw material that makes Luna and vice versa, Luna is also needed to cast UST. The correlation between the supply of Luna/UST will keep the UST rate approximately with the USD.

When the UST price is low, players will buy and exchange it to Luna to make a profit. Conversely, when the price of UST is high, players can exchange Luna equivalents of one USD into one UST to eat the difference. Luna has a strong connection to UST. This token has a total supply of one billion coins. If the network exceeds a billion, the Terra network will burn Luna until the supply returns to balance.

The catalyst that led to the decline was a series of large withdrawals from Anchor Protocol, a form of digital currency bank founded by Terraform. Such platforms are used by investors to profit by lending. As of early May, investors have poured more than $14 billion worth of Luna money into Anchor. Much of the stablecoin supply is also on the platform.

The large amount of transactions on Anchor causes the balance algorithm between UST and Luna to fluctuate sharply, causing de-peg status for UST. When the UST is de-peg, the player still converts the UST to Luna according to the correct balance algorithm to reduce the supply. However, the sudden increase in the amount of UST transfers led to a sharp drop in the price of Luna. As a result, UST no longer maintained the level of one USD/dong and Luna also collapsed.

The instability created a turnaround reaction, causing more and more investors to withdraw UST from Anchor to sell. The amount of UST stored at Anchor plummeted to just about $1.6 billion as of May 13, when its value plummeted from a fixed $1 to just $0.03. Meanwhile, the price of Luna also fell vertically from $ 77 to $ 0.1.

The world's largest exchange Binance is also not immune from the Terra crash. The amount of investment and profit up to 1.6 billion USD of Binance is only 2,000 USD after this event.

"A lot of people withdrew their money in the last few months because they realized this model was unsustainable. The widespread negative effect pervades investor sentiment. This will be the end of most stablecoin algorithms." , said Tether (USDT) co-founder Reeve Collins.

A de-peg case of a similar size took place in early June, involving Ether (ETH) and stETH mapping issued by Lido Finance. The platform allows users to deposit savings in ETH, but converted into stETH. Essentially, these two tokens are priced equally and are referenced (peg) to each other.

The stETH/ETH de-peg pair on June 13, where stETH can only be exchanged for 0.95-0.96 ETH, equivalent to a difference of up to 2%-5% from the ETH peg level. The reason stems from the fact that the ETH 2.0 upgrade process did not go as planned and may continue to be delayed, leading to investor anxiety in the context of the market constantly facing bad developments. .

According to CoinMarketCap data , ETH fell more than 12% in the following 24 hours, to $1,140 per coin, its lowest level in over a year. Large funds, typically Alameda Research, began converting large amounts of stETH to ETH to hedge their risk, causing stETH to continue to depreciate.

This move brought instability to other investment funds as they all hold large amounts of stETH. Celsius Network, one of the world's largest crypto lending and borrowing platforms, caused a stir on June 13 when it announced that it would not accept requests for transfers or withdrawals for an indefinite period.

De-peg caused 445,000 stETH to lose its original value after converting to ETH Celsius began staking stETH on various lending platforms for liquidity to sustain its service. The market took a turn for the worse as Bitcoin (BTC) continued to decline, causing Celsius's collateral to liquidate and push the platform into bankruptcy.

Large funds with assets of up to three billion USD like 3 Arrow Capital are also at risk of default due to the de-peg Luna-UST and ETH-stETH. Their debts have piled up since the fall of Terra. The fund was increasingly depleted of liquidity and had to sell more than 56,000 stETH, equivalent to $64 million, to ETH, making the de-peg situation even worse.

Panic sentiment along with a series of sell-offs made the market also suffer from a significant drop.

De-peg is the biggest disaster and obsession in the entire market to date. From retail investors to leading funds holding billions of dollars, it is inevitable that de-peg will be heavily affected.

"The big lesson from UST will spur efforts to regulate the digital currency system, especially stablecoins. These can be investments with great returns, but the risk of losing everything is also very high. Therefore, investors Investors should always make sure they understand what they're doing," said US Senator Pat Toomey.