Many people show off buying things with Pi . virtual currency

Although using virtual currency as a means of payment is against the law, many Vietnamese users boast that they have bought computers, food, etc. with Pi.

Nguyen Tam (Hanoi) said he bought an old laptop and paid for it with Pi on July 15 at a computer store in Hanoi. This device on the market costs several million dong, bought by him by transferring 200 Pi to the seller.

Nguyen Luong, owner of an electronics store in Hanoi, confirmed to start selling laptops with Pi. The number of Pi used to pay for the product depends on the agreement between you and the buyer. "So far, nearly a dozen people have come to buy in this way. I accept to exchange goods during this period," he said.

On Pi Network communities in Vietnam, a series of articles sharing about Pi transactions have appeared in the past weeks since Pi Network entered the official network stage and opened for transactions from July 13. Many people said they bought and sold electronic equipment, food ... with Pi, or exchanged Pi for nearly 1 USD.

According to Phien Vo, community administrator of Pi Network Vietnam, those who have KYC (identity verification), have balance in their accounts can transfer Pi to each other via the Pi wallet on the app. In the project white paper, this is the "closed mainnet" phase, where users can exchange goods and Pi for each other. While "open mainnet" is that users can exchange with other currencies.

"According to the project regulations, Pi holders can currently only exchange goods and services, not allowing to exchange for other currencies. However, when Pi is already able to transfer between accounts, How to use it depends on the needs of the user," said Mr. Phien. 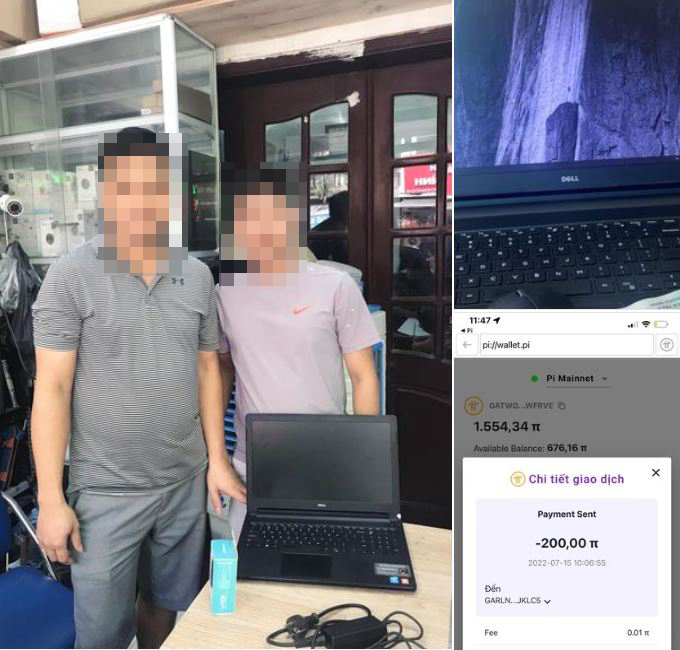 A transaction in Pi is posted on the community by a user.

The exchange of goods in Pi takes place on the basis of a "consensus price", that is, the two parties agree with each other. On Pi mining groups, posts about using this virtual currency for payment attracted hundreds of discussions, mostly about how to value the virtual currency.

A forum administrator said that the project does not have any regulations on the price. This led to some people offering tens of thousands of dollars for Pi. For example, a recipient who is the owner of a mutant orchid garden in Vietnam claims that Pi costs 10,000 USD. This guy sells a "mutant orchid" for $20,000 or buyers can pay with 2.1 Pi.

Risks when trading with Pi

According to Decree No. 80/2016/ND-CP supplementing the decree on non-cash payment, the payment means that can be used include: check, payment order, payment authorization, collection request, collection authorization. , bank cards and other means of payment according to regulations of the State Bank. Payment methods not listed above will not be legal in Vietnam.

Regulations on administrative sanctions in the monetary and banking sector, updated in 2021, also clearly state that those who "issue, supply and use illegal means of payment but have not been prosecuted to the point of liability. criminal liability" will be fined from VND 50,000,000 to VND 100,000,000.

In addition, the administrator of a Pi exchange community in Vietnam said that there is a situation of pretending to sell goods with Pi, but actually to advertise products, or trick others into taking Pi's. "There are many posts that offer high-value items and receive Pi payments, but when someone asks to buy with Pi, they don't sell. Some ask to transfer Pi first but then block contact," this person said.

Pi Network has been around since 2019, advertised as "owning virtual currency for nothing". After downloading the application, users will click attendance every day, then the number of Pi coins on the application will automatically increase. The application has been on the list of many downloads in Vietnam many times. As announced at the end of June, the project has more than 35 million users globally.

Meanwhile, experts are concerned that the project does not bring value, consumes users' efforts and may cause personal data leakage. Besides, the Pi lacks the transparency of a blockchain project when it does not make the source code public, and the smartphone application requires a lot of permissions to access the user's contacts.