How hurt are European countries when energy prices rise?

In Finland or Sweden, households are not affected much by rising energy prices, but the story in the UK or Estonia is very different.

Europe is facing a huge shock in energy prices. According to estimates by the International Monetary Fund (IMF), the cost of living of households here will increase by an average of about 7% this year compared to early 2021.

However, not everyone in Europe is equally affected. Considering each country, the difference is not small. The average Finnish family will be burdened with spending 4% more. But just passing through the Baltic Sea, the situation will be very different. In Estonia, households face losses of about 20%. Meanwhile, most of the rest of Europe's economies have rising costs somewhere between the two.

On average, Europeans spend 10% of their income on energy. Richer families tend to own larger homes and cars, but overall increases in energy costs are not much different.

Meanwhile, poor households have to spend more on energy. "In most European countries, high energy prices place a greater burden on low-income households. Because the share of electricity and gas expenditures in the budgets of this group is higher," the IMF acknowledged. determined. The poorer Eastern European countries are more vulnerable to rising energy prices than the rich Nordic countries. 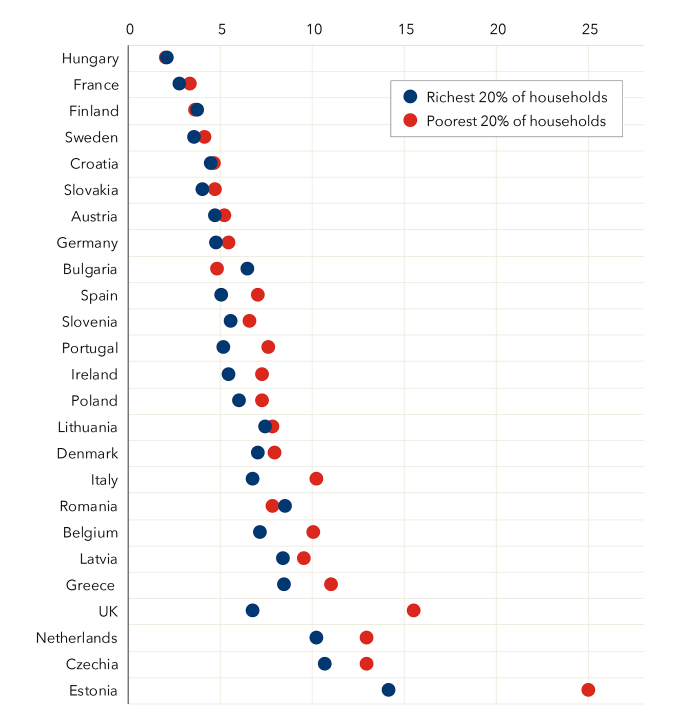 Increase in energy costs (%) relative to total household spending. Blue is the top 20% of households and red is the lowest 20%. Source: IMF

Gas dependence is another important factor in assessing each European country's vulnerability. Wholesale gas prices have doubled since the start of the Ukraine crisis.

Coal prices also increased, but more than 60% manageable. Meanwhile, the price of renewable energy remained unchanged. Thanks to a nearly unified natural gas market, European countries bear similar wholesale prices. This means that the gas generators in Bulgaria on the eastern flank of the continent also pay for the same input fuel as Ireland on the west side.

However, countries differ in their dependence. Less than 3% of Sweden's energy comes from natural gas. The country uses mainly hydro, wind and nuclear power. Houses in Sweden are heated by a common system, often fueled by wood chips or heat pumps. That means household spending has grown by about 5% on average, half as much as the UK, which is more dependent on natural gas.

The way countries calculate the wholesale price to the retail price of gas also varies. In many countries, energy companies buy gas under long-term contracts to hedge against rising wholesale prices.

Then, the different market structure means that the price going to the consumer also has different volatility. For example, in Spain, the consumer tariff is usually updated monthly. In Poland, they are adjusted only twice a year.

Most of the country's electricity comes from nuclear power. However, long-delayed maintenance caused them to import more electricity from neighboring countries, producing from gas power plants. 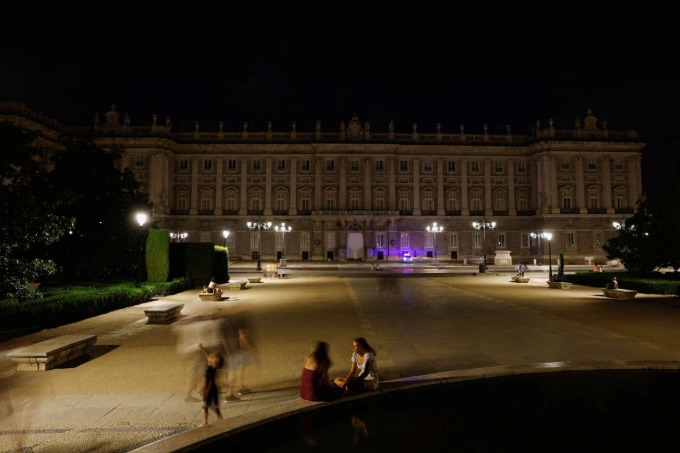 The Royal Palace of Madrid, Spain was not lit on the evening of August 10. Photo: Reuters

According to the IMF, European policymakers have so far responded to rising energy costs mainly with widespread price cuts, including subsidies, tax cuts and price controls.

However, the cost of these measures is increasing, causing budgets of countries to shrink. In many countries, this cost will exceed 1.5% of GDP this year.

On the other hand, imposing a ceiling on electricity price increases also reduces the savings motivation of households. This also makes the rich more profitable. According to the Economist , it is better for governments to subsidize energy only for specific purposes when it is needed.

However, according to calculations by the European Central Bank, only 12% of EU countries' spending to limit the impact of high energy prices is deployed in a targeted manner. As a result, the Economist argues that Europe should reallocate support in a more efficient way to deal with an energy shock that has an uneven impact.